Thanks to Everyone who made it to the 3rd Annual UNITE 09.

and support the scene & shows in your part of the nation.

Shows are not possible without the people in that State and surrounding states supporting them.

Even though the economy is in the dumps we still had an excellent turnout.

I wont claim that Unite is the best or biggest show but Me and the rest of the staff do what we can to make it the best show possible.

This was only the Unite shows third year so it is still a baby But We have Big plans for the future.

Thanks to everyone who stopped by the booth and picked up a shirt or hat.

Club Participation went to " Freaks of Nature " Once again and a close second was Acrophobia who had a strong clean showing as well.

Thanks again to everyone who made it to Unite 09.

Here is a list of the Specialty Award Winners. 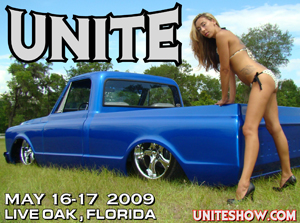